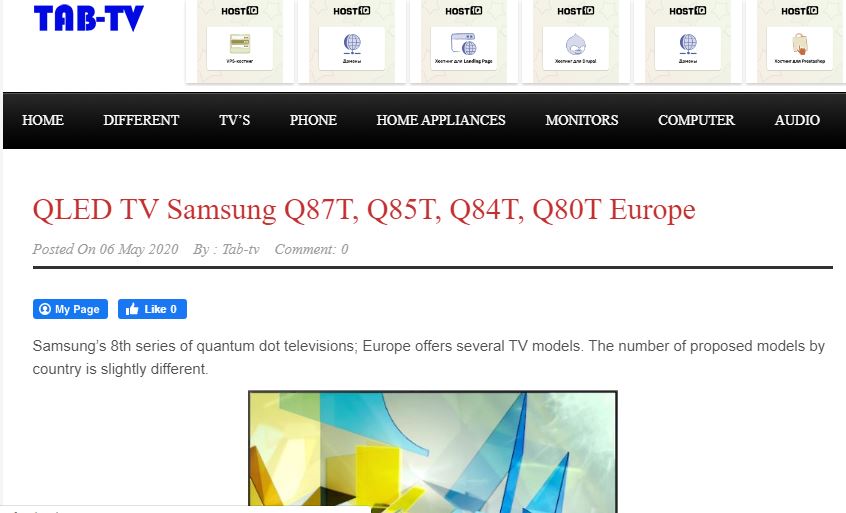 Samsung QUHD in other European countries

Other countries offer televisions of similar models. For example, in France so far, only the Q80T model is proposed.

Models of Q87T, Q85T, Q84T TVs are identical in technical specifications. They differ only in design, for example, the stand for installing the Q87T TV is black, while the model Q85T is silver.

There are technical differences between the Q80T models and other models. There are differences between the Q80T and others in the following. Q80T screens are installed that do not have anti-reflective coating. In other models of the 8 series, the screens are anti-reflective. The sound, although the power of the speakers is the same, but the Q80T model has 6 2.2.2CH speakers. Other models 8 speakers 4.2.2CH.

If very briefly, then these are TVs with screens with a color depth of 8 bits, to increase the number of shades and reach the level of 1 billion shades, FRC technology is used. Maximum TVs can show 100-120 frames per second. There are 2 sets of tuners, but this is only on TVs made for Europe. Televisions that are manufactured at the factory in Russia have only one set of tuners. In 2020, Samsung paid attention to the improvement of sound, applied new technologies for tracking sound and adjusting sound for the premises.

The table shows the detailed specifications of the QLED 8 Series TVs.