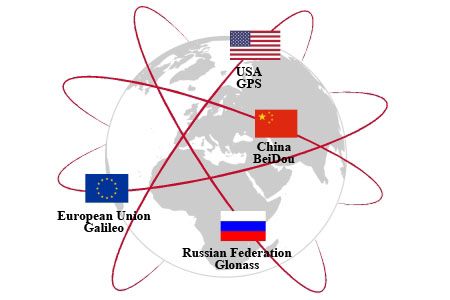 To locate on the ground with reference to the coordinate system developed different positioning and navigation. All of these systems were developed by military their main objective to provide guidance weapon at the target, the use of so-called smart munitions, the second purpose of navigation, orientation in the spatial coordinates.

For the civilian population, about 5% percent of navigation system capabilities are available

Navigation systems are under military control. The construction and maintenance in operational condition of these systems is very costly to cover part of the costs, the navigation system was opened for civilian use, but the team can disable satellites from any territory.

As of 2019 the following systems are operated.

At the stage of construction

Since smartphones have GPS satellite receivers that allows you to check the location.

The phone software overlays the location on the map in accordance with the calculated coordinates of the phone.
This is how maps on the phone and games that use geolocation work.